Trip is booked - dates are set. Actually been setting up this trip for about 6 months - but dint know when we were actually going until i had a finish date for my current contract. So the other week I got a date of 23 December -so now have us booked on flights to get to Hanoi for Christmas.

Why IndoChina - I was frustrated in getting there before. Coming home from England in 1990 I got a air ticket and visa to Saigon. However at that stage you still needed papers to leave the city - and no one would give any of the 10 or so backpackers in Saigon those papers. It was a very pleasant 10 days - very laid back- very little info available - not only pre-internet days but Laos pre-guide book days. The guide for Vietnam at the time was Routard guide in French - which I had failed to get hold of in Bangkok. On the way into the city from the airport the driver asked which hotel we wanted - we said a cheap one, he didn't know any !!! Ended up somewhere near the market, in a par time brothel - but very nice! In fact have found my notebook from that trip so I may well add an entry...

So now I am making good on Vietnam - introducing my partner Paul to some nice cheap and easy 3rd world travel and getting to Loas before its been over-run and maybe a bit of Cambodia in between. Paul has 3 weeks leave so he flys out of Cambodia- while I travel on up the Mekong through Laos.

Because Iget frustrated with others not entering the details :
Singapore Air
Wgtn-Akl-Sin-Han Siem Reap-Sin-Chc-Wgtn NZ$2065 plus taxes of about $200

What stands out in 2017 - is just how much airfares have dropped! Even flying direct with Air New Zealand I could go to Vietnam for a NZ$1200 - flying Air Asia - return is around NZ$700 - sometimes less. 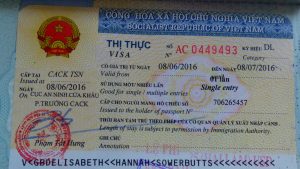 My Vietnamese visa issued on arrival at SGN Short answer – yes you need a Vietnamese visa if you travel on a New Zealand passport. (If you are a dual citizen of the UK or some European countries – you can  fly in (not  a land crossing) for 15 days without a visa). First Things… 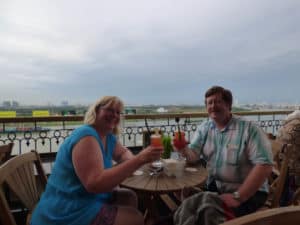 We’ve just returned from a short 2.5 week trip to southern Vietnam. Given that Vietnam seems suddenly being promoted to New Zealanders (thanks to the many more options of flying there) I thought I’d keep a record of our expenses on the ground to give you some idea. The Travellers My partner and I are…